Wherever my eyes fall

I see you everywhere.

In the still pond gathering ice

To conceal itself from winter

You are the deep shy water.

In the slow built sparrow’s nest

Of infinite eggs and seasons

You are the mother to spring.

Down from the mountaintop

You are a wild and fragile dancer.

In the autumn wind at odds

With the disappearing leaves

You are the promise of next year.

Wherever my eyes fall

I see you everywhere.

You have thus become my vision

As my eyes go blind with years.

When the first snow fell

Which played with endless summer.

Many winters I held the water captive

On the tops of many mountains

Still warm from the earth’s beginning

When the moon and the sun gave birth

To one full circle of beauty.

Many winters I blew the stars around

So that the place where each star fell

Was where a river grew

Taking as its course to the sea

The path of the winter sun.

Many winters the trees slept with me

And the animals walked on my breast

Just as the birds drew near

Seeking warmth from my fire

Which took the sting from the night.

Many winters I have been

Companion to the lonely moon

Chasing after the raging sun

Which listened to our song of thanks

Before releasing earth from winter.

When out of the melting snow

I am the spirit of spring. 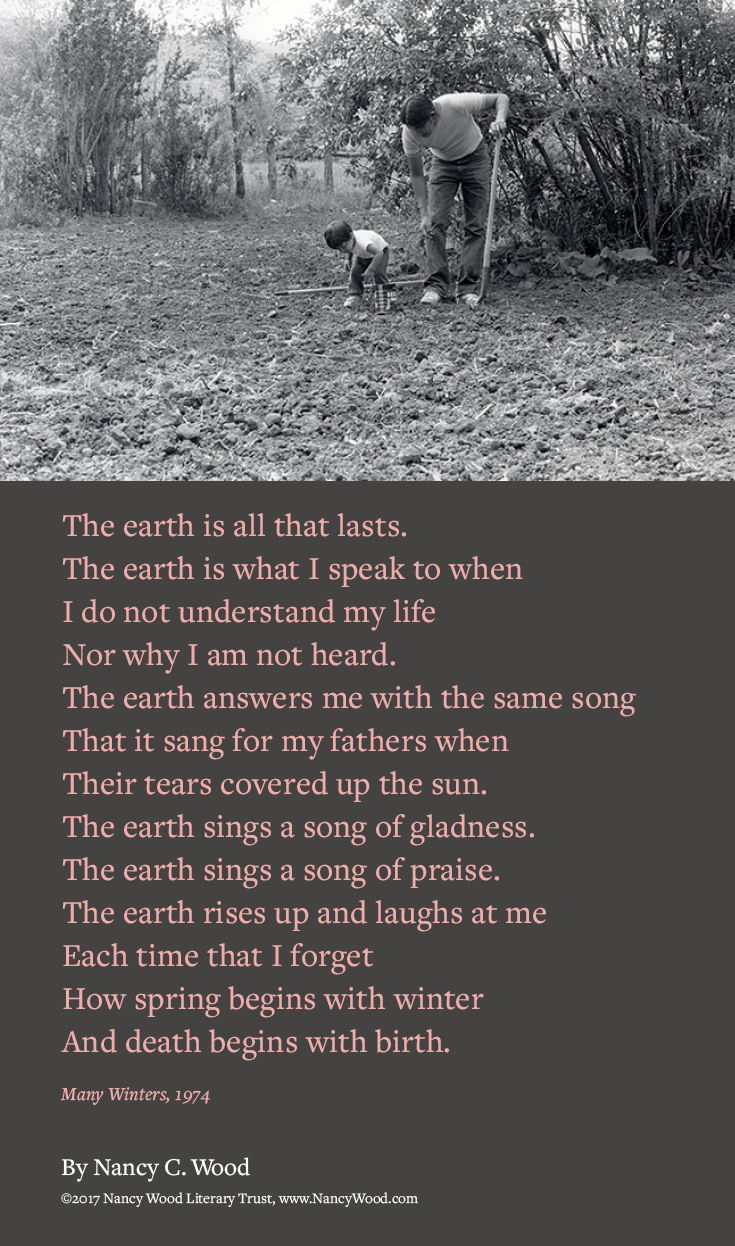 The earth is all that lasts.

The earth is what I speak to when

I do not understand my life

Nor why I am not heard.

The earth answers me with the same song

That it sang for my fathers when

Their tears covered up the sun.

The earth sings a song of gladness.

The earth sings a song of praise.

The earth rises up and laughs at me

Each time that I forget

How spring begins with winter

And death begins with birth.

What good are dead leaves

They nourish the sore earth.

What reason is there for winter

To bring about new leaves.

Why are the leaves so green

Because they are rich with life.

Why must summer end

So that the leaves can die.

with the music of the meadowlark. Here in my house, made

of the memory of summer and the desire for green grass,

I know that loneliness will never kill me.

Here in a room filled with sorrow for all the world in pain,

I know that fear can never blind me from seeing

eagles rising from the ashes of my fire.

Asleep in a bed covered with longing for spring,

I know that anger never soothed my heart nor

silence solved the problems of my world.

In my dreams I see a perfect little flower, and then I know

that love will heal most anything,